We were recently tasked with determining what effects the use of the minSdkVersion property within Android projects has on the security of the application; specifically whether or not it can result in a downgrade attack of the runtime environment.

In the case we were asked to look into, the application targetted a recent SDK version but also utilised a library which was targetting a much older SDK version, with several high severity vulnerabilities.

The question we set out to answer was whether or not:

To determine how the SDK version affects an application, a small application needed to be put together which would contain a vulnerability that was mitigated at the OS level in a later version. For this test, we chose CVE-2012-6636; the vulnerability that allows code execution via the JavaScript bridge and reflection in API versions prior to 17.

The vulnerable application consisted of a single activity which launches another activity contained within a library which contains the following code:

Upon launching this activity, a page being served by Metasploit would be loaded into the WebView and if vulnerable to CVE-2012-6636 would result in a remote session on the Android device.

The aim of this test was to determine if a matching minSdkVersion across the vulnerable library and the application using it will result in differing behaviour across an Android device at API level 15 vs API level 27.

When the application was run in an AVD using API 15, the exploit was successfully executed and resulted in a remote shell; as can be seen in the video below:

When run in the API 27 virtual device, the page loaded into the WebView instead displayed a generic 404 error page: 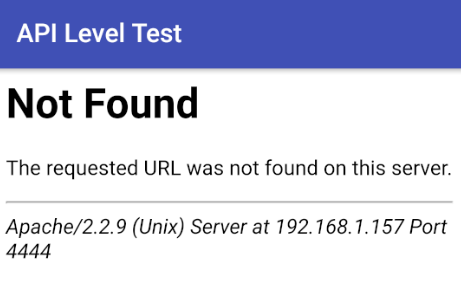 Back in the Metasploit console, we could see the 404 page was sent as a result of Metasploit failing to find a vulnerable JavaScript bridge:

This means that despite the lower minSdkVersion present in both the library and application’s Gradle files, the functionality never runs in any form of compatibility mode to make it function as it did in an earlier version of the API.

Although the first test confirmed what we believed would be the case (that the downgrade attack would not work), for completeness, we tested against the use-case that was originally proposed to us - an application with a higher API level using a library with a lower level.

First, we tweaked the Gradle build file of the application to make it instead require API level 27 or higher:

When working with the Android API, changing the API level of the application will not result in the functionality being unified across different Android builds. The API level you define in your Gradle build is used only at compile time / to flag to your IDE appropriate notifications and advice (such as insecure usage and deprecation warnings).

For this reason, you should consider carefully your design decisions and be aware of any potentially dangerous vulnerabilities from previous releases that could impact your application’s ecosystem, should you choose to continue supporting older devices.