Jahmel Harris at Digital Interruption submitted two bugs to ToyTalk and was awarded $1750. As the issues have been resolved, he wanted to write about the vulnerabilities so other developers will take this type of attack into account when writing mobile applications.

tl;dr vuln 1 - Lack of authentication allows a malicious actor to impersonate a child talking to Thomas

ToyTalk create “smart” children’s toys which (unsurprisingly) connect to the Internet. The reason for this is so children can have voice conversations with their toys which respond appropriately. During this research, we wanted to look at the security of these toys and understand the risks parents may be taking by bringing these types of devices into their homes. As the same library is used by all ToyTalk products, we decided to look at Thomas and Friends Talk To You Android application. As we’re very familiar with mobile testing, this seemed like a better idea than purchasing a Hello Barbie doll or Barbie Hello Dreamhouse (which would have also been vulnerable to the issues in this blog post). The Thomas app also had the advantage that the application could easily be removed after testing. We have no idea what we would do with a Wi-Fi connected Barbie when this research was over. 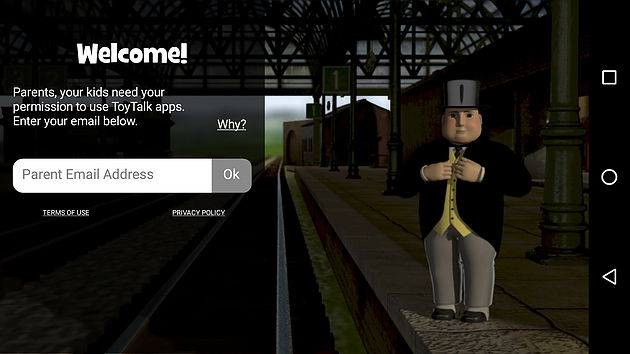 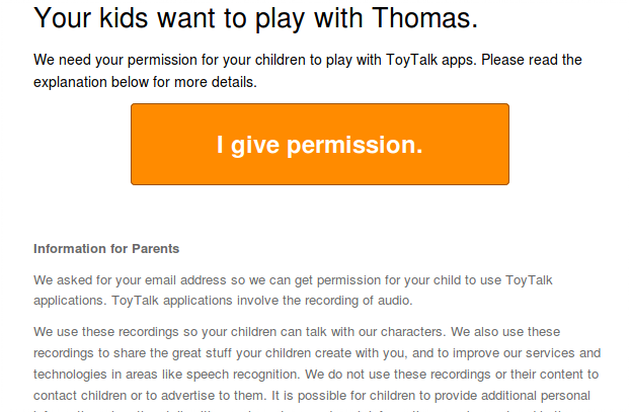 Initially, it looked like the attack surface was fairly minimal for this app as the only features available were the app asking for consent and then allowing a child (or security researcher) to speak to Thomas and his friends.

The first step in most mobile application assessments is to intercept network traffic. In the case of this application, however, it proved a little more difficult than most other apps as a client certificate was in use. This meant that mutual authentication was used between the application and the web server. In that case, step 0 becomes recovering the client certificate and any passwords needed to access it.

After reverse engineering the application, it was possible to find two functions:

Rather than continuing to reverse the app to find where the password comes from, we used the following frida script which dumped the password and filename.

The correct certificate files could then be extracted from the apk and used to help perform a man in the middle attack. It’s interesting to note the toytalk.12 file doesn’t use a password.

Now we’re able to use the client certificate, but we still need to bypass certificate pinning. There are several ways I can see to do this, however the easiest was to just remove the certificate from the apk, rebuild and reinstall.

With the client certificate in burpsuite and certificate pinning disabled, we can now move onto the first step of most mobile application tests - intercepting traffic.

One feature available to the application which isn’t immediately obvious at first is that the audio files captured by the app are saved online for later playback by parents. This is tied to the email address used for consent although unavailable until a password reset is performed by the parent.

When the “speak” button is held down, the application sends the audio file in a post request to the web server as below:

Although there is lots of values sent, by changing the account ID to another user’s account ID it is possible to send the audio to the specified account. This would allow a malicious actor to send obscene messages for the parent to hear.

In this case though, the account ID is a random GUID. We need a way to discover valid account IDs based on a something we might know, such as an email address.

A clue to this was actually found by running the “strings” command on the ToyTalk library.

This vulnerability was fixed by requiring the correct Device ID to be submitted along with the associated account ID. We have not tested whether the device ID can be recovered, however to add a Device ID to an account, it appears that access to the associated mailbox is required.

After spending time working with ToyTalk on the previous vulnerability, Jose Lopes (@b4stiel) suggested I take another look at the register/email functionality.

When registering a device with an application such as “Thomas And You”, an email is sent to the supplied address asking the user to confirm the device. As this email contains text from the user (the device name) it is possible to modify the device name included in the HTML of the email. This would allow and attacker to perform actions such as link to a malicious website or change the email body to be an offensive message.

To send an email to a user, the user first needs to be registered which therefore increases the likelihood of the malicious email being trusted. Using a registered email address, an attacker can recover the account ID (as discussed above) which is needed to send an email .

First, an attacker (with a victim’s email address) should make the following request to get the account ID:

With an account ID, an email can be sent to the victim as in the following request:

This is just a simple PoC that injects an HTML link using the <a> tag into an email but it is thought with some time it would be possible to craft a more enticing email to put users at risk from more advanced social engineering attacks. For example, one parent could trick another into revealing their user name/password as this email appears to come from support@toytalk.com. In the screenshot below, it can be seen we’ve added links to a malicious website in an email sent from ToyTalk.